Main Reasons for MAF Sensor Failure in a Mercedes

Mercedes is known for its jaw-dropping stylish designs and sophisticated vehicles. However, with time and use, or with poor maintenance practices, parts failure and faults can start to occur with any Mercedes model. This can take the joy out of driving and turn it into frustration. One of the parts that can fail is the Mass Airflow sensor. Let’s take a look at some of the top reasons why this failure can occur, what to do about it if it happens to your Mercedes, and where to go for help.

What is the Mass Airflow Sensor?

The Mass Airflow sensor, or MAF sensor, is a black cylinder with various ports and valves which connect to various engine systems. It is found under the hood, either in close proximity to the engine or directly attached to it. The main role of the MAF sensor is the monitor the air flow as it enters the engine, working with your vehicle’s onboard computer to ensure the correct air and fuel mixture required for optimum ignition is achieved.

The MAF sensor is able to monitor the airflow through weighing and recording the temperature of the air. It is then able to pass this vital information on to the onboard computer which can then direct the fuel injectors, adding the right amount of fuel to the engine with pinpoint accuracy. This helps ensure the engine operates at optimum levels, which helps achieve maximum fuel economy.

What are the common causes of MAF sensor failure?

Your MAF sensor can fail for multiple reasons, many of which can be prevented by routine servicing. The most common kind of failure is disruption to the surface of the sensor. This happens when contaminants such as dirt and debris from the road is able to cover the sensor, preventing it from being able to take accurate readings of the air entering the engine. Contaminants should be cleaned away after at least every 18,000 miles to prevent this from becoming an issue.

Cleaning the sensor is quite an easy task, and if you’re mechanically minded, you can include this as part of your ongoing maintenance plan by following this method:

Connectivity is another common MAF sensor issue, as the MAF sensor relies on electrical contact to communicate with the onboard computer. Therefore, if it fails, the information that the MAF sensor collects is effectively blocked from the computer’s access. The sensitive measuring instruments of the MAF sensor can also become compromised and if readings are still made and can often be inaccurate, reducing engine performance and fuel economy.

The PCV valve can also play a role in causing the MAF system to fail, as it is in charge of taking in the air, which the system measures. Therefore, if the PCV valve is faulty, it might be because it is blocked or damaged. If so, the MAF sensor will not be able to take accurate readings.

Lastly, mechanical damage can impact the performance of your car’s MAF sensor, which is most commonly caused by driving on rocky or uneven roads as well as impacts or bumps. These can cause the sensor to become loose, affecting its electrical contacts and also potentially damaging its sensitive measuring equipment. 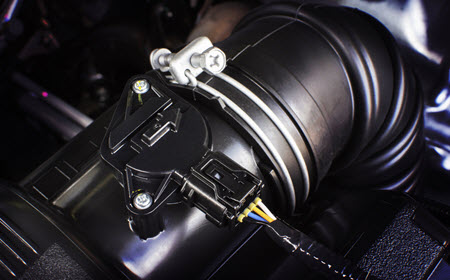 Paradise Valley, McCormick Ranch, and Scottsdale, AZ should make TechPlus Automotive their first pitstop for all their MAF sensor maladies and more. The dedicated specialist team of mechanics will treat your Mercedes with the respect it deserves. We are well known for our cleanliness when it comes to undertaking repairs. We are well regarded as the number one repair shop in the area and have a state-of-the-art facility to work in, meaning no task is outside of our capabilities. Call or come by today.