Signs of a Dead Battery in a Jaguar

When your battery is dead, unless you get a jumpstart, your Jaguar is going nowhere. This can be a big inconvenience and can make you late for work or in the position where you have to cancel plans. It goes without saying that you want to avoid a dead battery at all costs. In this article, we’ll first look at how you can tell your battery is faulty and on its way out, and secondly, why your battery may have become faulty.

Signs of a Faulty Battery

There are 5 clear signs that your battery is past its prime and needs replacement. Let’s take a closer look at these below.

The battery is needed to power all the lights and accessories in your car, which is why you’ll end up with a dead battery if you leave your Jaguar’s lights on overnight. If the battery isn’t providing your Jaguar with enough power to sustain the lights, or if the supply of power is inconsistent, you’ll notice that your vehicle’s lights begin to flicker or are dimly lit.

This is the most obvious sign of a dead battery. Your battery is needed to set the combustion process in motion, which is what brings your car to life. Without the battery working correctly, your Jaguar will crank but won’t turn over.

You should regularly check the terminals of your Jaguar’s battery for signs of corrosion, as this is a clear sign that your battery is on the way out and needs to be replaced. While you may be able to milk a few more miles out of the battery by cleaning up the terminals, the only way to stop the corrosion is to replace the battery.

Your Jaguar has a battery warning light on its dashboard. When this light illuminates, it means that there is a problem with your battery or with the alternator. This should be investigated as soon as possible to prevent you from being stranded with a dead battery.

Common Causes of a Dead Battery

There are five common causes for a dead battery, which are as follows:

If the battery is functioning fine but you’re getting all the warning signs that it isn’t, then make sure to have your alternator checked. The two parts work in harmony with one another and can often mask each other’s failure. The alternator helps to keep the battery charged, and without it, the battery will drain itself to provide power to your Jaguar.

Sometimes the cause of a dead battery is just because the battery has reached the end of its lifespan. Batteries tend to need to be replaced every few years. An old battery won’t be able to hold as much charge as it used to or charge to 100% capacity. This is a normal part of vehicle maintenance that must be done to maintain your Jaguar.

3. Problem with the Charging System

Almost every driver has left your lights or another battery-powered system on accidentally overnight. This will drain your battery. While some modern vehicles have fail-safes to prevent this from happening, driver error is still a leading cause for dead batteries.

Parasitic drain occurs when the engine is off but the electrical components still operate, due to malfunction, and drain the battery. This is caused by an electrical fault that needs attention as soon as possible.

Get Powered Up by Tech Plus Automotive 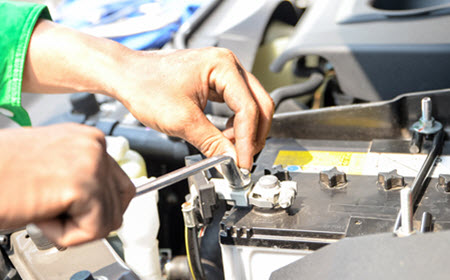 If your Jaguar’s battery is becoming a problem, don’t put up with the stress and hassle any longer. If you’re a driver of the communities of Phoenix, Paradise Valley, McCormick Ranch, or Scottsdale, AZ, then make Tech Plus Automotive your next pitstop. We’re a friendly team of automotive experts who will give your battery, alternator, and electrical systems a proper inspection with repairs so full power is restored to your Jaguar.