Reasons for Excessive Engine Smoke in Your Porsche

Porsche vehicles tend to be sleek and simple in their design. Over the years, Porsche has refined the appearance of their vehicles to a point where visually, less really is more. Porsche represents the epitome of high-class motoring, offering perfection in aerodynamic design that makes hitting the road feel effortless.

However, one thing that will certainly affect this effortless perfection is excessive smoke coming from your engine and your exhaust. In this article, we will take a closer look at the different types of smoke you might notice and what they might signal for your Porsche.

Why is smoke created, and why should I be mindful of my exhaust?

Smoke is created when the air/fuel mixture in the engine is burned to drive the crankshaft. This smoke typically is a combination of 2 things: exhaust fumes and blow-by gases. Blow-by gases are full of unburned fuel particles and are sucked back up by the PCV valve for reuse. The exhaust fumes are released through your vehicle’s exhaust pipe via the catalytic converter which converts these fumes into safer emissions. These are then released from your Porsche.

These emissions should be more or less invisible. If they start to become visible, are excessive, or have a tinge of blue or black color, then you have a clear sign that something isn’t right with your vehicle.

A lot of underlying engine issues can be quickly diagnosed by monitoring exhaust emissions. We will explore these in the article below. It is important to know that avoiding the problem solves nothing. It will not simply go away and will likely only get worse, resulting in damage to your engine and its surrounding parts far. This will create far more expensive repairs bills then simple maintenance would cost.

If you’re noticing a change in emissions or an increase of smoke under the hood of your car or coming from your tailpipe, then there are some other questions to ask yourself regarding the state of you engine:

If the answer is yes to one or more of these questions, combined with increased smoke or emissions, then it is almost certain you have an engine issue on your hands that should be assessed by a professional mechanic.

When dealing with an emissions issue, it is important to know the difference between smoke and steam. Smoke is caused by something burning, such as fuel. However, steam is the result of the evaporation water.

A steam-like vapor coming from your tailpipe is nothing to worry about and is caused by condensation building up within the exhaust system, which will eventually clear.

When it comes to issues with smoke, paying attention to its color can help you to diagnose the problems which you might be facing such as:

White smoke can be caused by a harmless condensation build up in the exhaust pipe. However, it can also be indicative of a much more serious issue such as an engine coolant leak that has been able to run through the engine and exhaust systems.

Blue smoke is caused by issues with oil. Usually, this is the result of an oil leak that has been able to reach the exhaust. The blue smoke can be a result of the oil being burned or damage to the valve seals, piston rings, or turbochargers.

This can also be the result of oil burning, but it can also be indicative of the failure of the PCV valve or even a transmission fluid leak.

If you live in or around Phoenix, 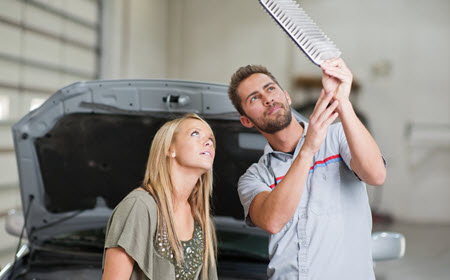 Paradise Valley, McCormick Ranch, or Scottsdale, AZ, and find your Porsche is having issues with excessive engine smoke, then head on down to the professionals at Tech Plus Automotive. With experienced professionals and great customer service, you really don’t need to look anywhere else for a trusted mechanic to service your Porsche.