BMW Engine Rebuilding is Not an Easy Task

To keep BMW vehicles performing at an optimal condition, the engine needs to remain well-serviced and maintained. If you have had your BMW for an extended period of time, there are engine parts that may fail, such as the engine bearings. In order to replace this part and others, a complete engine rebuild is required.

Making the decision to rebuild a BMW engine is a serious one and requires deep thought because it is a difficult task. To be successful at the task of rebuilding a BMW engine, you need to know ahead of time why you are rebuilding the engine, the steps to do so, and the professional option.

Reasons to Rebuild a BMW Engine

This leads to the second reason for a BMW engine rebuild: improper lubrication. To maintain optimal performance, the engine needs to be lubricated at all times. There is engine oil and coolant continuously flowing through all the parts of the engine. If the engine oil and the filter are not changed when recommended, the engine parts will wear at a quicker rate than expected. Over time, the constant lack of engine oil or coolant will lead to an engine rebuild.

Steps to Rebuild a BMW Engine

If you plan on rebuilding a BMW engine, you need to be prepared with the steps to do so, because this task is not an easy one. The first step is researching and obtaining all the tools that you will need to perform the rebuild. It is also beneficial for you to have an instruction manual for your BMW or for just the engine. This way you will have something to refer back to if you need to.

The second step is to drain all the fluid in your BMW. The engine oil and the coolant should be drained into different pans so the recycling process will be easier.

The third step is to prepare the engine for removal. Take off all the plastic covers, remove the radiator, and disconnect the battery and the starter. Then remove the starter, the exhaust manifolds, and the air compressor. Unbolt the engine from the transmission.

The fifth step is to mount the engine on an engine stand so you can move on to step six and remove the parts attached to the engine, such as the belts and accessories.

The eighth step is to rebuild the engine in the reverse of how each part was taken out. Generously lubricate the parts as you attach them back to the engine.

The steps provided above can be used as a rough 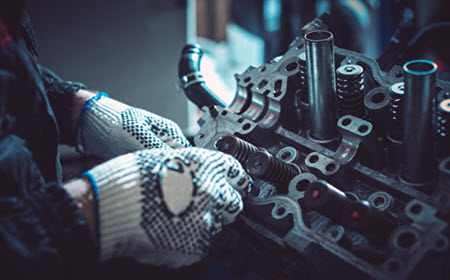 outline. Within each step, there are smaller ones that should be followed exactly in order to ensure that all parts are accounted for.

As you can see, the process of rebuilding a BMW engine is not an easy task. If this seems too daunting, you are not alone in feeling overwhelmed. In this case, it may be best to leave it to the professionals.

Tech Plus Automotive services the communities of Phoenix, Paradise Valley, McCormick Ranch, and Scottsdale, AZ. We can safely and accurately rebuild your BMW engine. Our technicians are trained and certified in BMW models, technology, and components. You can put your trust in us. We will have your BMW engine rebuilt in a short time so you can get back on the road safely with confidence in your engine rebuild.